Well, not really but a new man on da block… I do have an announcement to make! Dustin and I were talking a couple weeks ago about social media stuff, nothing out of the ordinary at our house. But then, at the same time, we were like why don’t we do this together! We do a lot together; train, race, eat, sleep, well you get the picture! We’ve always been told we’re like a team in our relationship. So after 5 years, a house, 3 rescue dogs, and a few moves, why not combine forces?! I’m kind of lucky because Dustin is pretty knowledgeable on all things fitness related so without further ado, here’s Dustin!

Alright, I guess I better start off by introducing myself. My name is Dustin Bernatovich and I have been racing since 2009. I’ve raced all distances in the sport of triathlon from sprints to being a 3x Ironman finisher (and shooting for number 4 in 2015). In 2013 I had a injury that almost took me out of racing all together. I have 3 ruptured discs L3-S1 and had to have a Microdiscectomy. Luckily, I came back to being 100% and in the 2014 season it was with vengeance PR’ing every race I did except for one. 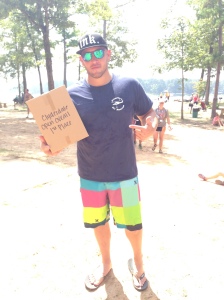 Here we are at the end of the season and looking back we all have to ask ourselves what do we need to improve on. I know I still need to be a faster runner, better on hilly courses cycling and keeping that motivation up when training. So I ask you what do you need to focus on for next season and how do you stay focused during those long training blocks with out a race!!!   The picture was taken this morning doing bridge repeats in Grand Isle, LA while at work… No excuses for next season!!!

Well, I got busy yesterday and actually decided to sign up for a race! First one since Ironman Texas – I’m so excited! With the move, packing, job searching, and all the other stuff coming along with it, I had to put some stuff on the back burner but now, I’m excited to announce I’ve sign up for the Atlantic City 1/2 Marathon!

With less than 45 days away, I’m focused and getting my workouts in! It is so exciting to have something to works towards again and it’ll help me out for my Disney Goofy Challenge as I plan on doing 7 miles the day before… I feel it’s important to treat it like a training run even though it’s a race! 😉 My energy is going up and I am in a better mood and I believe this is showing to all those I encounter! It’s also a plus that this race is in my backyard and it appears the turnaround for the 1/2 marathon will be on the boardwalk near our house! Maybe some neighbors will come out and cheer me on 🙂

In other news, I’ve had fun trying to write this little blurb having the lap dogs on me (yes, they’re boxers and at least 90 pounds) but it’s nothing but love!

Happy tri’ing everyone! Or as I approach the winter months – Happy Runnin’ Y’All!!